Can We Lift Performance of the World’s Toughest Triathletes?

Aker BioMarine, Pure Science Triathlon team and Norseman have pioneered a study that examines the effects of krill oil omega-3s on athletic performance and recovery.

The Isklar Norseman Xtreme Triathlon is considered the ultimate triathlon in the world. Racing through some of the most beautiful landscapes in Norway, those who are able to finish at the rocky peak of Gaustatoppen (located at 1,850m above sea level) can say that they travelled one of the toughest full distance triathlon on planet earth. And in addition to the grueling physical aspect of the race, the weather can range from beautiful and sunny to a blasting wind and blizzards, sometimes all in one day.

Unmatched by other extreme events due to its difficult and punishing severity, the annual ‘fjord to peak’ Norseman Xtreme Triathlon provides the ideal test with which to gauge just how important a role omega-3s can play in ultimate performance.

Omega-3s are some of the most important nutrients that our bodies need. They are essential for maintaining and supporting cardiovascular, brain, eye and joint health. They are also important for sports endurance and recovery, which is why Aker BioMarine has set out to explore the effects that krill oil has on Norseman athletes and Team Pure Science.

“We know that high-intensity training has an impact on immune function and inflammation, making athletes especially vulnerable to illness and infections. This has a direct impact on the athletes’ physical recovery and performance.”

“In order to thoroughly research the effects of omega-3 DHA and EPA in regards to maximal exercise, we didn’t have to look far. Norseman athletes are some of the strongest competitors in the world. The fact that these incredible athletes are meticulous in their training, routines and diet, makes them the perfect research subjects.”

2016 Norseman winner Kari Flottorp Lingsom outlines the extreme training demands of the race, “Preparing for the Norseman is a very intense period. It is not just a four-week gig. It is more like eight, nine months with two to four hard-core workouts a day.”

Conducting a pilot during Norseman 2017, Dr. Storsve and his team used Omega-3 Index testing before and after the race, finding that in general, the athletes experienced a severe drop in DHA levels in the five weeks after completing the contest. The good news, however, was that supplementation with a high dose (4 grams a day) of krill oil restored the DHA drop and significantly increased the athletes’ Omega-3 Index. 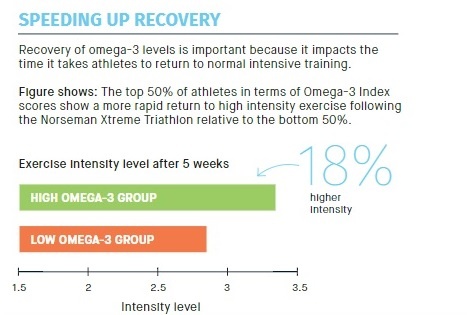 Unlike traditional sources of omega-3s such as fish oil, the long-chain omega-3 fatty acids found in Antarctic krill are in phospholipid, rather than triglyceride form. A key distinction from the rest, omega-3 phospholipids are delivered much more effectively to tissues and cells than triglycerides and play a vital role in keeping membranes functioning.

This is essential for the team’s elite athletes like former World Ironman under 24 Champion Hans Christian Tungesvik.

“To perform at the maximum level, I need to give my body the nutrients that it needs, particularly to avoid injury and illness, because that enables me to get the consistent training I need for a race like Norseman.” 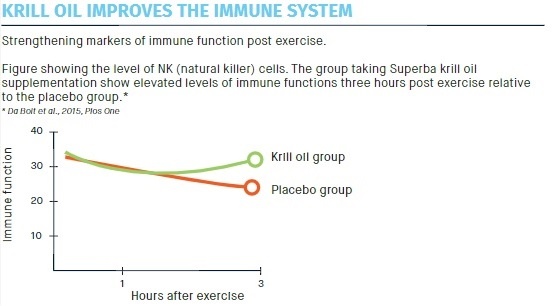 “Obviously omega-3s are an important part of my diet and nutrition, so I am really eager to see how krill oil can affect my performance and recovery,” says Tungesvik.

Another important finding of the study, Dr. Storsve brings out, is that the Omega-3 Index turned out to be the second best predictor of bike leg time, after exercise volume, and ahead of important factors such as pre-race injuries, illness and early-life fitness level. According to Dr. Storsve, this can be a game-changer for the top athletes.

Since testing a random group of 50 athletes from 2017 Norseman field, the 2018 research study will enable a more in-depth, systematic study of the importance of phospholipids for recovery in both training and competition.

“During 2018 Norseman we will be testing for specific biomarkers of inflammation and immune responses as well as the effects of choline, which is a central component of krill oil, on performance and recovery,” says Dr. Storsve. “By doing so, we will get a more complete understanding of the nutritional factors that help athletes optimize their performance. However, the results so far suggest that krill oil can have a real impact in the world of sports.”

According to estimates, 97% of women of reproductive age suffer from the symptoms of pre-menstrual syndrome (PMS). From bloating and headaches to anxiety and irritability, PMS impacts emotions, behavior, in the early stages of the menstrual cycle. Thankfully, there are supplements that can help alleviate PMS symptoms that can interfere with everyday life.

Lisa Miller - Communications Director, US
May 20, 2022 Ultra-processed food is killing us... how krill oil can help

For this blogpost we have borrowed the title of the cover of Newsweek of december 2021, "Ultra-processed food is killing us!" and yes, we do believe that a better balanced food with fresh ingredients supported by supplementation like krill oil phospholipids omega-3s can be a good way to combat the negative health effects of an ultra-processed food diet.

Did you know that krill oil can help improve your eye health? It's true...not only is krill oil good for your overall health; it is clinically shown to combat the symptoms of dry eye such as inflammation, irritation and redness.